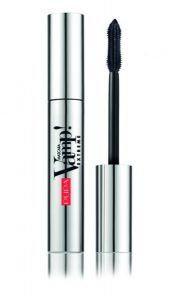 Pupa Vamp Extreme has been made for special tasks – it is supposed to give a scarily seductive look, eyelash definition and enhancement of each and every lash. It has an intensely black pigment (which fades in the bright lighting). You should know there’s an impressive choice when it comes to colors – seven shades including bold turkois, light blue and… red!

Pupa Vamp Extreme has quite untypical gel consistency – it aims at coating all lashes with the product precisely. The effect is quite good, eyelashes are thicker yet the lighter shades don’t give corner or lower lashes good coverage (so they make better choice for lighter lashes). The gel-like formula has good and bad sides: it defines lash density – it’s a perfect choice for ladies who have thin and ‘invisible’ lashes. Too bad, this product fails to give as spectacular extension as other mascaras in the ranking.

The brush is made from elastomer (silicone) of new generation. It is elastic, flexible and soft, resembling the shape of an hourglass. The spiral is quite big; its unique shape requires some skill in use. The wide top of the brush easily catches lashes and combs them but it stains lower eyelids.

The mascara makes the lash line look fuller and separates but it gives no extension effect – the gel formula is quite watery and fails to build up on lash tips.

The mascara gets mixed reviews – mostly because of an untypical applicator which easily gets on your lower eyelids. Women who have thin and dense lashes like the effect more than those hoping for lash extension. The large size surely encourages to get the product but remember that the big brush picks up too much mascara so it runs out in no time.

Check the Reviews of the Best Products

How to tint your eyebrows and eyelashes? Henna tinting – in-salon or at-home?

Which mascara to choose? Types of mascara wands

Types of mascara wands. Which one is the best?